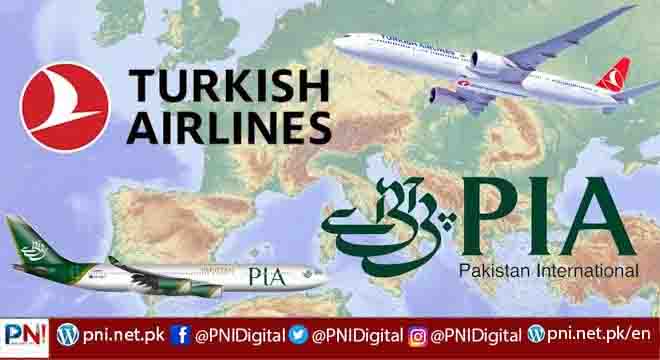 Speaking on the National Assembly floor, he said that PIA would operate up to Istanbul and transfer passengers for onward destinations in the UK, USA and Europe (29 destinations).

He further informed that similar code-share agreements would be signed with other countries in order to boost the institution. “We are trying our best to purchase more planes for PIA to raise its standard as par with other international aviation companies.”

He said that consistent five years of hard work, merit-based promotions, transfers and induction would ensure the development of PIA.

He also criticised the PTI’s former minister Sarwar Khan for denting the PIA institution at the international level by giving irresponsible statements regarding fake degrees of pilots.

Khawaja said: “Since 2009, PIA remained compliant with European Union Aviation Safety Agency (EASA) regulation and operated flights to/from EU states safely till 30th June 2020. In between, EASA undertook regular two yearly safety audits in 2015, 2017, and 2019. Various observations that surfaced during these audits, were amicably addressed as per the defined timeline.”

“Flight operations of both airlines to EU member states were suspended from 1st July 2020 primarily because of irregularities in the pilot-licensing process. However, while suspending PIA authorization, EASA has also quoted some SMS compliance issues pending since the last audit of 2019.”

The minister informed the floor that consequent to suspension effective since 1st July 2020, PIA embarked upon a swift recovery plan, owing to the following actions:

On 2nd December 2020, EASA accepted all deliverables submitted by PIACL for closure of Level-1 finding related to Organizational SMS but linked the reinstatement of Third Country Operator (TCO) Authorization with safety concerns on licenses issued by PCAA.

On 31st March 2021, EASA once again accepted and appreciated the steps taken by PLACE regarding organizational SMS, but extended the suspension for an indefinite period amidst Significant Safety Concern (SSC) raised by ICAO regarding certification and oversight capabilities of the Pakistani Aviation Regulator, i.e. PCAA.

He said that the ICAO USOAP audit of PCAA was conducted from 29th November 2021 to 10th December 2021 during which PIACL facilities were also visited by the audit team for verification of compliance with applicable ICAOSARPs & PCAA regulations on Flight Operations, Safety and Air Worthiness Management areas, hence PIA has been cleared by IOSA with 97% satisfaction ratio.

The minister said EASA would plan an audit of PIA in coordination with the European Safety Commission depending on the security and COVID-19 Pandemic conditions.

Meanwhile, the UK Department for Transport (UK DFT) has linked the lifting of the suspension of PIA operations to the UK with the successful conduct of USOAP audit with positive outcomes specific to personal licensing, airworthiness and flight operations.

The clearance by EASA is still awaited as European Commission is still engaged with PCAA for verification of PCCA’s pilot licensing certification process and SMS oversight capabilities, he said.

PIA, Khawaja said, has met all conditions of EASA and over final response submitted in December 2020 was accepted by EASA, as assessed as satisfactory for closure of finding related to organizational SMS.

However, for reinstatement of TCO authorization, EASA has demanded that the same shall be considered after the restoration of confidence in the certification and oversight capabilities of PCAA.

In this regard, PCAA has cleared a full-scale USOAP audit conducted by ICAO in November-December 2021. Since then PCAA is following up this issue with
European Commission which is expected to be resolved soon.

To overcome the difficulties due to the suspension of flights to Europe and the UK as well as to facilitate overseas Pakistani, PIA continued to facilitate the customers through a charter operation to UK and Paris, he said.

He said the list of Functional/ operational and non-functional/ scaled-down and closed airports are attached with CAA documents.

To a question, he said that Gwadar International Airport is under construction under the umbrella of CPEC.

He said that an aerodrome airport is also under construction in Muridke, Punjab, which is expected to complete on 10th February 2023, while Gwadar International Airport is expected to be completed by September 2023.