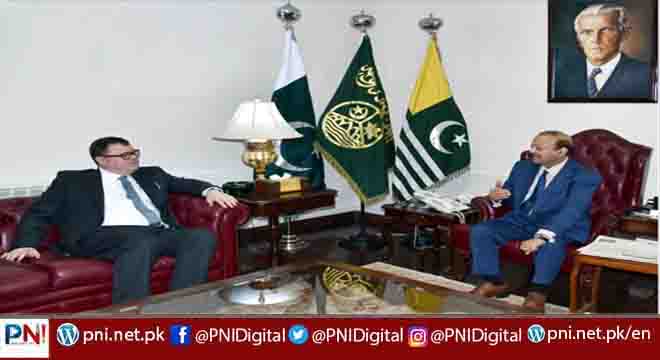 Islamabad (PID, AJK) President Azad Jammu and Kashmir Barrister Sultan Mahmood Chaudhry has said that Norway should use its political and diplomatic clout to help resolve the long-standing Kashmir dispute in line with the wishes and aspirations of the Kashmiri people.

” Having an excellent track record on human rights Norway can play a positive role to bring an end to human rights violations in occupied Kashmir”, the AJK President said adding that Norway can also play a mediating role in Kashmir between India and Pakistan because Norway enjoys equal and excellent friendly relations with both the countries.

Referring to the volatile situation in the region, the president said that any untoward incident in the region could be a prelude to a big war that can affect the peace of the whole world.

“It is therefore imperative that friendly countries like Norway should come forward and use its diplomatic clout to help resolve the dispute peacefully”, the president said.

He expressed these views during his meeting with Norwegian Ambassador to Pakistan, Per Albert Ilsaas, who called on him here today.

On this occasion, the President Barrister Sultan Mahmood Chaudhry, also briefed the Norwegian Ambassador, about the latest situation in Occupied Kashmir and the violations of human rights there.

Barrister Chaudhry said that it was high time that the global community should realize their moral obligations towards suffering humanity in Kashmir and play their role to address the lingering dispute peacefully.