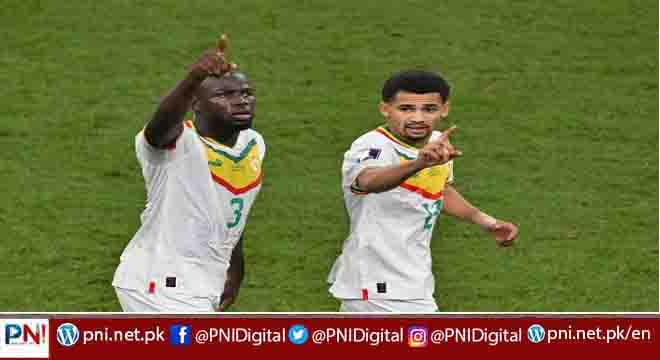 Doha, Nov 29 (AFP/APP):Senegal captain Kalidou Koulibaly said on Tuesday he never gave up hope of reaching the World Cup knockouts when star striker Sadio Mane was ruled out, even if most of the world doubted them.

Koulibaly’s second-half goal was the difference as Senegal beat Ecuador 2-1 to book a spot in the last 16 for only the second time in their history.

The Chelsea defender was named man-of-the-match and dedicated the win to Mane, who was forced out of the tournament with a knee injury picked up with club side Bayern Munich.

“When it came to his injury, I think two thirds of the world probably doubted we would be able to qualify,” Koulibaly told the post-match press conference.

“The only ones who thought we could still qualify were the African people and the Senegalese people.”

Koulibaly, whose goal was his first in 67 appearances for Senegal, revealed his side had been inspired from a pre-game message from Mane.

“He sent us a message before the game. Even though he is not here (in Qatar), he is with us.”

The 31-year-old defender said he needed to take a leading role when news of the former Liverpool striker’s injury was confirmed.

“I couldn’t believe it when I heard about his injury. I knew there would be a lot more pressure, but we are a team,” he said.

“Yes, Sadio is a star — he is a symbol of the Senegalese football team — but there are 11 players on a football field.

“This is their time to shine”.

Manager Aliou Cisse said during the week that Mane was “here with us” and regularly contacted several members of the squad.

“Yes, it was something that was very important for us. It was a goal that sealed our spot in the Round of 16.

“It was exhilarating. Football is an emotional game… football is a beautiful game.”

Like Koulibaly, Cisse dedicated the win to Senegalese midfielder Papa Bouba Diop, who died two years aged just 42, but added “we could also dedicate this victory to lots of other people”.

Diop scored the only goal as they stunned then world champions France 1-0 at the 2002 World Cup on their way to a quarter-final appearance, which remains the furthest an African team has progressed at a World Cup.