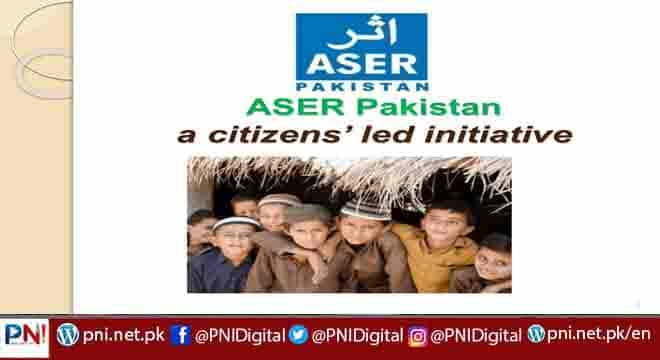 ISLAMABAD, Mar 10 (APP): The 19 percent of children remained out of school in 2021 while the 40 percent of government and 23 percent of private schools imparted multi-grade teaching till grade 8 while multi-grade in grade 2 and 8 has been dropped in government schools due to improved number of teachers and classrooms.

According to annual status Of education report (ASER) 2021 launched here on Thursday, around 81 percent of children were enrolled in government schools whereas 19 percent were going to non-state institutions, 1 in Madrassah.

The share of private schools has been dropped by 4 percent as compared with year 2019. This enrollment in government schools poses new challenges for supply side actions in terms of facilities and more spaces and teachers for children, who can be accommodated, attend and learn above all in public sector as their fundamental entitlement.

The report was based on citizen-led household survey. The Idara-e-Taleem-o-Aagahi (ITA) conducted the survey report in joint collaboration with around 20 organizations and 1,000 volunteer citizens visited 152 districts in 4420 villages to implement the ASER survey from 87,415 households and 247,978 children of age 3-16 years.

As per report, for the year 2021, the ASER rural survey assessed 212,105 children of 5-16 year age in Language (Urdu/Sindhi/Pashto), English, and Arithmetic competencies mapped to the Curriculum and Textbooks.

The report till date has further annually informed about the progress and challenges for Article 25 A of the constitution extending education for All 5-16 year old children since 2010 and for tracking progress towards SDG 4, measuring learning at the lower primary level.

Learning lies at the heart of the education enterprise but because of the pandemic and school closures, ASER rural results for 2021 reflect a drop in enrollment for age group 3-5 and 6-16 years.

The share of private schools dropped by 4 percent as compared to year 2019.
This enrollment edge in government schools poses new challenges for supply side actions in terms of facilities and more spaces and teachers for children who can be accommodated, attend and learn above all in public sector as their fundamental entitlement.

For the first time during COVID there are more boys which were skewed due to data from Punjab. Boys are presumably going to child labor and dropping out of schools. Vulnerability of our children is on the increase.

The Early Childhood Education (ECE) has been historically tracked by ASER Pakistan. From 2014 when ECE enrollment stood at 39 percent, it has registered marginal decline 38 percent in 2021.

The report stated that although ECE was a critical for foundational learning readiness in literacy and numeracy, but remains largely ignored as a holistic sub-sector addressing the physical, socio-emotional and cognitive domains.

According to the rural portion of the report, the student competencies in learning Language and Arithmetic have declined 55 percent of class 5 children could read a class 2 level story in Urdu/Sindhi/Pashto compared to 59 percent in 2019.

Children enrolled in private schools are performing better in literacy compared to government counterparts and boys outperform girls; however, in numeracy both sectors are at par. Foundational learning trailing from grade 3 remains compromised in grade 5 and even in grade 8! Learning Poverty is on the rise.

The report highlights that whilst children in private schools taking tuition has remained at the same level 22 percent as in 2019, paid coaching has recorded a massive jump for children in government schools from 6 percent in 2019 to 20 percent in 2021 Increase in tuition in government schools by 14 percent during COVID-19 is a burden on poor households.

The support from family in learning during covid-19 (68 percent) is a sign of hope for bridging the home-school divide. distance /edtech learning solutions must be developed further. teleschool coverage shows increase from 35 percent in March 2021 to 57 percent in November 2021.

The ASER report further highlighted that school functioning across every district in Pakistan. Overall teacher attendance in surveyed government schools was 90 percent, whereas it was 92 percent in private schools on the day of the survey.

Whilst private school teachers were reported to have better qualifications at graduate levels (37 percent) compared to 32 percent in government schools; however, for MA/MSC qualifications, a larger percentage of public sector teachers (27%) have a higher qualification than private counterparts (21 percent).

The ASER 2021 school level survey included a “Health and Disability” section; head teachers/teachers were asked questions pertaining to Children with Disabilities (CWDs) and appropriate facilities in their respective schools. Overall, 21 percent of the surveyed government schools reported having children with disabilities, compared to 24 percent private schools.

The ICT’s ASER 2021 collected information on important civic, social safety net support and 21st century indicators. The technology profile of households is changing rapidly. Compared to 2019 when 66 percent of HHs (rural) who had cell phones, there are 77 percent households in 2021. 62 percent have smart phones.

Amongst mobile users, 89 percent use WhatsApp services, whilst 64% use SMS facility. The 23 percent have internet connection and 18 percent have computer/laptops. 65% households have TV and 18 percent have radio. Social safety nets are being offered to 16% of the population against 12 percent from 2019.

ASER Pakistan, collects information from children on learning and other critical indicators across rural and urban households alongside schools producing internationally comparable data on the acquisition of foundational lower primary skills, holding national and global-level institutions accountable for delivering on the SDG 4 promises.

ASER Pakistan, not only collects data to highlight education challenges across the country, it identifies the most under-privileged areas within Pakistan, surviving under extreme poverty, where girls in rural areas, and the disabled are likely to be most vulnerable.

Evidence on learning, disaggregated by geography, gender, inclusion and wealth, generated by ASER/ITA annually propels democratically elected governments to target, plan and spend better with measurable positive outcomes so that they live up to their manifesto promises.