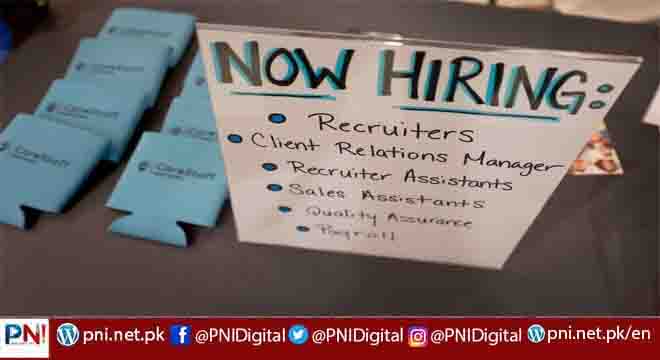 Washington, Dec 2 (AFP/APP):US job gains were unexpectedly robust in November despite efforts to cool the economy, while unemployment held steady and wages ticked up, the government reported Friday.

The figures provide little relief to officials who have been fighting to tamp down decades-high inflation amid concerns that elevated costs could become entrenched.

The world’s biggest economy added 263,000 jobs in November, Labor Department data showed, down from a revised 284,000 figure in October.
The unemployment rate remained low at 3.7 percent.

The US central bank has raised its benchmark interest rate multiple times this year to ease demand, with higher lending costs making it more pricey to borrow funds to buy cars and homes, or expand businesses.

While such policy tightening may ordinarily lead to job losses, economists have noted that firms are reluctant to shed workers they may have struggled to find since the outbreak of Covid-19.

Average hourly earnings for private sector workers rose 18 cents to $32.82, and over the last 12 months, wages have grown 5.1 percent.

The report also said there were notable job gains in leisure and hospitality, health care, as well as in government.

The labor market “remains far too hot” for the Federal Reserve, said ING economist James Knightley in an analysis.

This is because tightness in the jobs market has implication for wage pressures, which make up the largest cost in delivering services, he said.

Meanwhile, the jobless rate was steady as labor participation — which is still below pre-pandemic levels — fell once more, Knightley said.

Analysts believe the latest data supports further tightening of monetary policy by the US central bank.

While the Fed has signaled this week it might be time to moderate its aggressive campaign to cool the economy, there remain questions over how much higher rates have to go to bring inflation under control, said Fed Chair Jerome Powell.

The central bank has raised borrowing rates six times this year in hopes of easing demand, including four steep rate hikes, while walking a fine line to avoid tipping the economy into a recession.

The trend of wage increases appears stable, but analysts have been “hoping to see a clear softening,” said Ian Shepherdson of Pantheon Macroeconomics.

“Even if inflation drops faster than expected over the next few months,” he said, policymakers “will be worried about a rebound in the second half of 2023 and beyond if wage growth does not slow.”