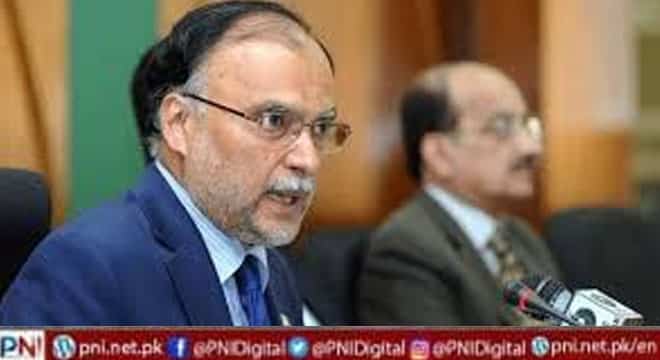 LAHORE, Dec 01 (Online): Federal minister Ahsan Iqbal has said we have lagged behind in 75 years because we are more corrupt.

“we could not make progress because we are more incompetent, he said this while addressing a ceremony in a private university at Lahore Thursday.

“we have only one issue which is political instability. There is no continuity in our policies. The other countries have left us behind. Bangladesh, Indonesia and Malaysia are its precedents., he added.

It is my appeal to the nation and youths that they should have difference of opinion but they should not foment hatred.

We have changed difference of opinion to hatred, he underscored. The society has been polarized while it urgently needs stability, he remarked.

He observed “We will have to think that the societies cannot run due to hatred. It is urgently needed that we should keep in view the element of respect before criticizing each other.

I appeal to the economic experts, traders and the industrialists they should come to modern technology, he said adding the country will run if dollars come.

We will have to pursue the way of giving good future to young generation. There was a time when Pakistan was going up but again and again its way was blocked.

We blocked the development on the way while Bangladesh and India did not do so. It is still time that the politicians should sit together and make decisions in parliament prudently.

He made it clear that the situation has not changed. We are seeking loans from the other countries. Pakistan was on the way to go default but we overcame the situation.

He indicated that the cities are spreading on fast pace. Why we cannot go to the largest projects of the world.

We have the best architects and the young generation has talents. Construction industry should benefit from new technology, he urged.