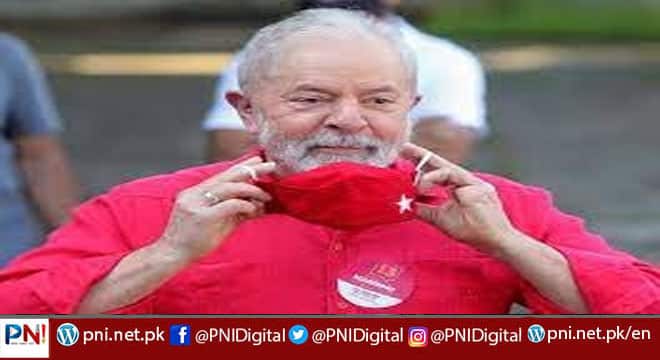 Brussels, Nov 15 (AFP/APP):Former Brazilian president Luiz Inacio Lula da Silva said on Monday he is ready to stand for election to take back the reins from his far-right successor, Jair Bolsonaro.

But while declaring “I’m willing, I’m motivated, I’m in good health” to be a candidate, Lula said he would only make his decision early next year, months before the October 2022 election.

Speaking in Brussels at a media conference in the European Parliament, alongside the head of the legislature’s Socialists and Democrats grouping, Lula, 76, made his opinion of Bolsonaro clear.

Lula, a former trade union leader who was president between 2003 and 2010, is credited with a hefty lead way ahead of Bolsonaro in voter intention polls.

In Brussels, he again dismissed as “persecution” graft charges that landed him in prison during the last election, in 2018, but which were overturned this year by Brazil’s supreme court.

Since being freed, Lula has cut a figure as a presidential candidate-in-waiting for next year’s polls.
He said of his Workers Party: “We need to have someone who stands, we need to win the elections. And at the same time, we have to rebuild Brazil.”

He added that, “in February or March, I will decide whether I stand or not. It depends on whether the party wants me to be a candidate.”