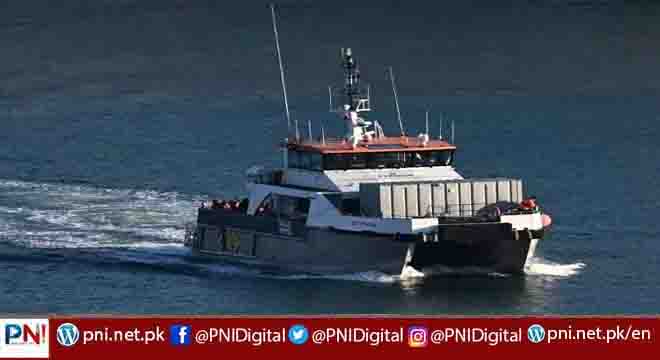 Dover, United Kingdom, Dec 1 (AFP/APP):From the white cliffs above Dover, on England’s south coast, it’s possible to watch as migrants who have attempted to cross from northern France in small boats are brought ashore.

On Monday, 426 were intercepted, according to government figures. On Tuesday, there were 884 in 17 boats, with 426 in eight boats on Wednesday.

The numbers add to a growing total of some 43,000 who have made the journey across the Channel so far this year — a record.

One of the main promises of the Brexit-supporting UK government was a promise to “take back control” of immigration after it left the European Union.

But Home Secretary Suella Braverman told parliament last month: “We have failed to control our borders.”

Above Dover on Wednesday, on a fairly mild day with a cold but calm sea below, the scale of the situation is clear.

Border Force boats return to port with empty inflatable boats. One pulls as many as four of the flimsy vessels.

At about 2:00 pm (1400 GMT), dozens of migrants intercepted at sea arrive on board two more Border Force craft.

A few hours later they are taken by bus to a transit centre, where their demand for asylum will begin to be considered.

One such centre, Manston, near Dover, was embroiled in a political row in October after more than 4,000 people were placed there despite it having a capacity of just 1,600.

One man with diphtheria died at the centre in mid-November. Since then, dozens of cases have been identified among other migrants.

“I did the crossing in September,” said Abas, a 30-year-old Afghan originally from Kabul.

“The boat was in a bad condition. There was water coming in. We called the UK for help once in UK waters,” he told AFP.

After being transferred to Manston, he was moved into hotel accommodation and is currently housed in London, near the modern highrises of the city’s business district.

The hotel is now closed to tourists and paid by the government to accommodate asylum-seekers.

Abas, who has applied for refugee status, says his decision to escape Afghanistan where he had worked for NATO was prompted by the Taliban takeover in August 2021.

He fled via Iran, then Turkey before crossing Europe. He came to the UK because he speaks English.

There are, according to Abas, 300 other asylum-seekers like him in his hotel.

Many arrived by boat across the Channel, which is one of the world’s busiest shipping lanes. But others who have been in the UK for longer stowed away in lorries.

“It has become so difficult to travel by road on lorries,” said Peter William Walsh of the Migration Observatory at Oxford University.

The small boat route “has become an established route now”.

“With the smuggling elements, it’s become more established and also I think in the minds of those making the crossing, the Channel no longer represents this big barrier that it did once,” he added.

On November 24 last year, however, in the worst migrant tragedy to date in the Channel, at least 27 migrants including a seven-year-old girl died.

The tragedy and a controversial UK government plan to send failed asylum seekers on a one-way ticket for resettlement in Rwanda has not proved a deterrent.

The Rwanda plan, announced by former prime minister Boris Johnson’s government, has since stalled due to court challenges.

In the meantime, Paris and London signed an agreement in mid-November with the UK agreeing to pay France another 72.2 million euros ($74.5 million) to prevent migrant boat crossings.

For now, the UK’s asylum system remains more overwhelmed than ever.

As of the end of September, over 140,000 asylum-seekers were waiting for their cases to be dealt with — three times more than in 2019.