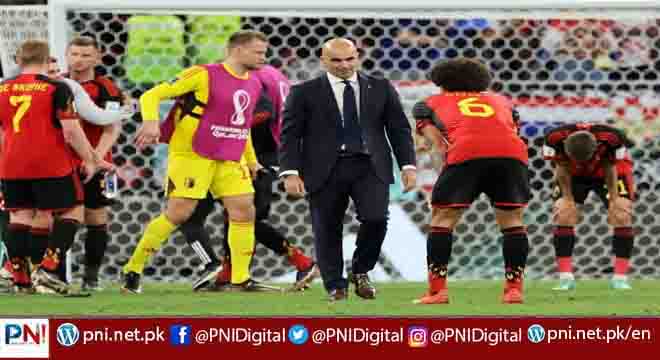 Doha, Dec 1 (AFP/APP):Belgium coach Roberto Martinez said he was leaving his job after his side were eliminated from the World Cup in Qatar following a 0-0 draw with Croatia on Thursday.

The 49-year-old had been in charge since 2016 and his contract was due to run out after the tournament.

“That was my last game with the national team, I can’t carry on,” Martinez said at his post-match press conference. “It’s the time for me to accept that this is the last game.”

Martinez led Belgium to a third-place finish at the 2018 World Cup in Russia and to the Euro 2020 quarter-finals last year.

But his ageing side could not replicate that form in Qatar, crashing out after scoring just one goal in three games.

The Spaniard said he was always planning to leave after the World Cup.

“It’s got nothing to do with being eliminated in the group stage.

“Since 2018 I had many opportunities to leave, take jobs at club level, but I wanted to be loyal. I don’t resign, it’s the end of my contract.”

Belgium went into their final Group F game needing to win to be certain of reaching the last 16 after a 1-0 win over Canada and a 2-0 loss to Morocco.

They were left to rue a string of missed late chances by Romelu Lukaku.

“Today, if we would’ve gone through I think we would’ve seen the real Belgium and we could’ve been very competitive in the next rounds,” insisted Martinez.

“The disappointment was against Morocco. Today we were ourselves, we played a very good opposition… The first two games we weren’t ourselves.”

Martinez took over the Belgian national side months after being sacked by Premier League side Everton.

He has still only won one major trophy in his managerial career — the 2013 FA Cup with unfancied Wigan Athletic.

Croatian counterpart Zlatko Dalic believes Martinez will not struggle for offers of other jobs.

“Martinez is my friend, it was a surprise to me,” said Dalic, who took Croatia to the 2018 World Cup final.

“Belgium have lost a great professional. For four years in a row they were first in the FIFA ranking.
“It was his project, but it’s not an abrupt end for him.”

Martinez consoled his players on the pitch after the game in emotional scenes which could herald the end of an era for Belgian football.

They had reached at least the quarter-finals at the past four major tournaments but struggled in Qatar with a team featuring several key players in their 30s.

“We were surprised, he told us that (he was leaving) while crying,” said striker Michy Batshuayi.

“There are a lot of players who cried, it’s the last for some players. It’s the World Cup, it’s not a friendly match, it’s every four years and it’s normal that there are many regrets.”