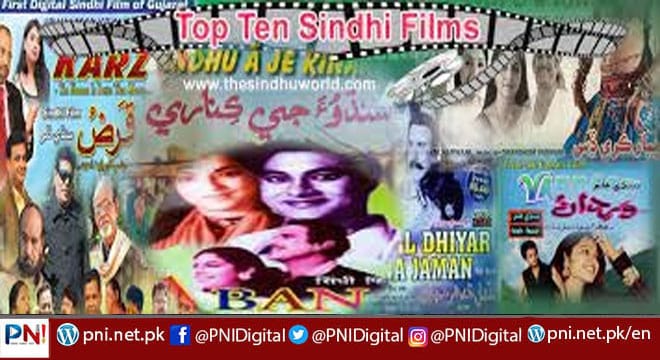 Golden era of Sindhi cinema span over 41 years in which around 73
Sindhi films were released, except a pre-partition film EKTA which was
released in 1940.

Umar Marvi was the first golden jubilee hit project in the Sindhi
language. This film was dubbed in Urdu and released as Marvi on May
24, 1963 Urdu dialogues were written by Arsh Lakhnavi and songs by
Dukhi Premnagri, Tamanna Siddiq and Makhdoom Lakhnavi.

Legendary actor Mustafa Qureshi debuted in the Pakistan Film Industry
with a Sindh Film titled, PARDESI, which was released in 1958 and
highly acclaimed and paved the way for the success of the actor in
future.

Another Sindhi film “Rat jaa Rishtaa” was screened in 1975 and
produced by veteran actor Qurban jeelani and proved a hit in the row
of Sindhi Films.

Famous TV and Film Star Anwer Iqbal who recently died, has also a
credit to act in a Sindhi Film titled “Dostan jo Piyar” which was
released In 1978 and did average business.

In 1985, Renowned film maker Shah Asad produced Jalal Chandio, based
on the real life of a folk Singer which was highly acclaimed by the
masses at that time, similarly Shah Asad also produced block buster
PAROO (1987) and SHAHEED (1989).

WADERO SAAIN portrayed Sindh Culture was released in 1992 after
dubbing into Sindhi version but flopped at box office as compared to
original film WADERA which was released in 1986 and remained
successful,starring Mustafa Qureshi, Anjuman, Arifa Siddiqui. Babar.