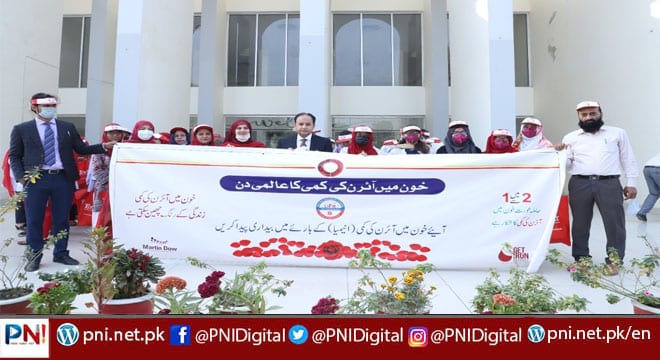 Karachi (PNI) Iron is the most important mineral for the proper functioning of the human body and its deficiency can have severe complications on people of all ages. To raise awareness about this vital issue, an Iron Deficiency Day celebrated globally on 26th November.
The purpose of this day is to highlight how Iron deficiency can take away the colors of life. It is pertinent to note that 30% of the Pakistani population is suffering from this problem which is responsible for 40 % of maternal death and unfortunately adolescent females are also at a high risk of suffering from it.
Expressing his views Rashid Hasan Khan CCO at Martin Dow Marker said ‘’According to the national health survey, Iron Deficiency is the largest nutritional deficiency affecting 1.62 billion people around the globe. The most affected group is preschool-age children, with a prevalence of 47%, followed by pregnant women (41%), non-pregnant women (30%), school-age children(25%), and people older than 60 years of age (24%); men are the least affected group (12%).
Consequences of iron deficiency are devastating and it is high time that people take iron balanced diet, regularly monitor their HB levels and immediately consult a doctor in case of symptoms.”
He further said ‘’Martin Dow Marker observed Iron Deficiency Day across Pakistan to highlight the importance of Iron in the human body. In a series of activities MDM engaged 3000 doctors to raise awareness among the general public. Awareness walks, academic sessions, medical seminars, medical & Hb & Blood levels monitoring camps, and virtual information session were conducted to highlight the severity of the disease and it complications for all age groups.’’
About Martin Dow
Martin Dow Group is the 6th largest Pharmaceutical Group of Pakistan, creating distinction for over 60 years by shaping and leading the future of healthcare. Utilizing its boundless powers of expertise and technical excellence, it aims to achieve meaningful innovations that enrich the lives of people around the world. Under the pioneering leadership of its Founding Chairman, M. Jawed Akhai, the organization evolved by leaps and bounds. His pursuit of excellence, commitment, and constant drive to recruit high-quality resources has taken the company across borders and contributed to its relentless growth trajectory.