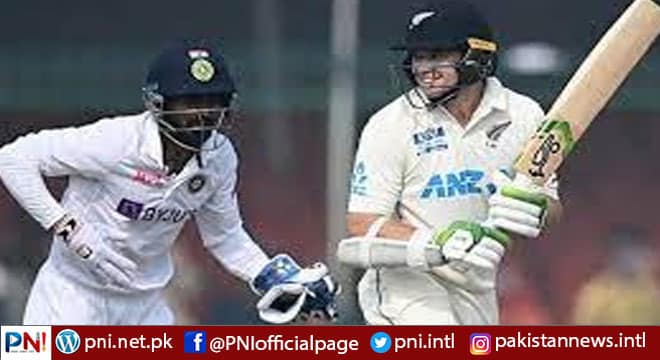 Kanpur, India, Nov 29 (AFP/APP):Tom Latham and William Somerville stood unbeaten as New Zealand reached 79 for one while chasing 284 for victory on day five of the opening Test against India on Monday.

Latham and nightwatchman Somerville put on an unbeaten stand of 76 to deny India a wicket in the first session in Kanpur. The Kiwis need another 205 to win and take lead in the two-match series.

Somerville, an off-spin bowler who has a Test best of 40 not out with the bat, joined the left-handed Latham after the fall of Will Young on day four.

The pair survived a testing spell of bowling from Ashwin and fast bowler Umesh Yadav after New Zealand started the day on four for one.
Somerville, who batted at number 10 in the first innings, hit five boundaries after he got his first run in 15 balls.

The ball turned and even stood low on a final day track at Kanpur’s green park but the left-right batting pair kept up the grind in their attempt for a best-ever chase in India.

West Indies chased down 276 in Delhi in 1987.
India declared their second innings on 234-7 in the final session on Sunday with Wriddhiman Saha scoring an unbeaten 61 after Shreyas Iyer’s 65.